Greatest 80s Music Videos – the Digest: “Once in A Lifetime” Talking Heads

When “Once in A Lifetime” debuted on MTV in 1981 it went into heavy rotation in the consciousness of everyone who saw it and became an instant classic. The Talking Heads went from being artsy underground musicians to the coolest of New Wavers. The video highlights all the early VHS video effects: multiple images, squiggly lines, static, washed backgrounds. Even with all this razzle dazzle there is nothing cheesy about the result, it has a timeless hip quality.

The video focuses almost entirely on the choreographed movements of David Byrne, lead singer of Talking Heads, and is a startling piece of performance art. From the moment Byrne appears on the screen in his slim suit, bow tie, and Buddy Holly glasses, like a nerdy Vegas magician — he single-handedly started the “hip to be square” movement — your attention is transfixed by his movements.

He pops up and down, hyperventilating. He is stressed and peculiar, seeming to be suffering from a panic attack or some mania. Perhaps he is symbolically diving into and out of the electric blue green ocean which undulates behind him. He jerks and sweats like an animated puppet or a distressed robot man. Toni Basil is the choreographer of the video, she of the famous Mickey video (Also an actress in Easy Rider. What a career!). In preparation for the video, Byrne studied documentary films at USC and UCLA of people in trances. Basil also showed Byrne films of people with epilepsy to widen his scope.

And you may find yourself living in a shotgun shack

And you may find yourself in another part of the world

And you may ask yourself

Well…How did I get here? 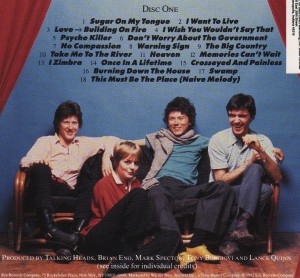 Byrne spoke to Time Out about writing the lyrics: “Most of the words in ‘Once in a Lifetime’ come from evangelists I recorded off the radio while taking notes and picking up phrases I thought were interesting directions. Maybe I’m fascinated with the middle class because it seems so different from my life, so distant from what I do. I can’t imagine living like that.” An examination of the lyrics reveals an existential subtext about the flow of life and the strangeness of arrivals and happenings. They are quite poetic and fun to ponder.

Letting the days go by

Let the water hold me down

Letting the days go by

Same as it ever was…

The funky rhythms and twinkly synth melody of the song are irresistible. All four of the Talking Heads (Byrne, Chris Frantz, Jerry Harrison, Tina Weymouth) and Brian Eno are given writing credit for the song, from the album Remain in Light, their fourth album. The brilliant producer/musician Eno produced the song and is responsible for the way the song fades between different rhythms. But it’s the odd “moves” of David Byrne that really make the video. He mimics people in tribal footage, as though leading an elaborate video prayer ritual. My favorite is when he places his forehead on the ground and then swivels it toward the camera to sing more lyrics. He stumbles backward as if pummeled by unseen forces. Byrne later wears a giant suit in Stop Making Sense, the Jonathan Demme concert movie, further utilizing his unusual movement instincts.

There is a wonderful minimalism to the video. You really focus on the music and on Byrne and his trance-like possession. At the end, Byrne appears briefly in smoke (another classic 80s video meme) and then we see a more normal relaxed version of Byrne wearing a casual shirt, but still singing the lyrics. It is as though through his travails he has achieved enlightenment and clarity.

Here is the true test of the video’s power: 1.) find another adult person 2.) perform a chopping motion along the lower part of your opposite arm. 3.) Most of them will say, “Same as it ever was!”

Robb Skidmore writes 'upmarket literary' fiction. He is the author of “The Pursuit of Cool”, a critically acclaimed coming-of-age novel about love, music, and the 80s, and the novella “The Surfer.” His short stories have appeared in many publications. When not writing, he enjoys traveling, finding music for his iPod, and staring at the sky with wonder and appreciation.
View all posts by robbskidmore88 →
This entry was posted in 80s, entertainment and tagged 1980s, david byrne, entertainment, MTV, music, talking heads, television. Bookmark the permalink.

4 Responses to Greatest 80s Music Videos – the Digest: “Once in A Lifetime” Talking Heads